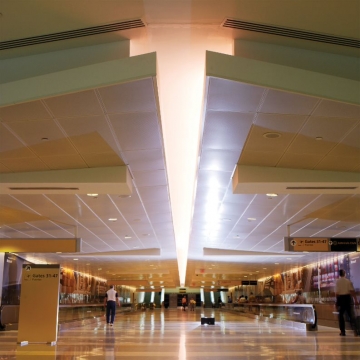 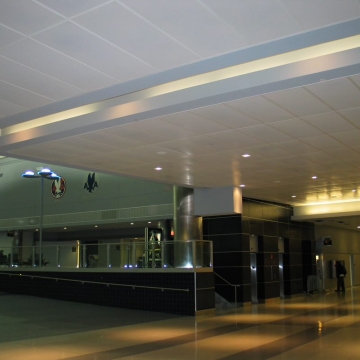 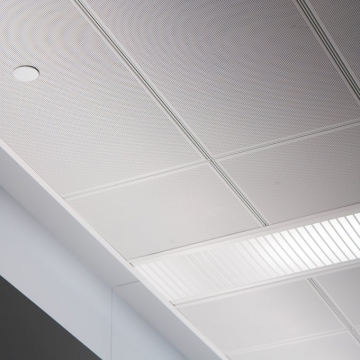 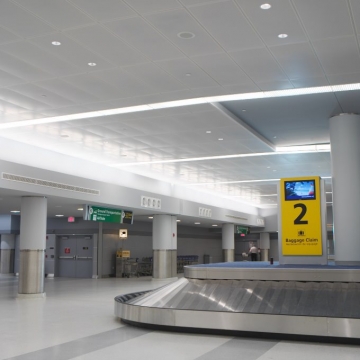 Doing What Others Couldn’t

Three months before its grand opening, the American Airlines’ flagship World Gateway Terminal at New York’s John F. Kennedy Airport was missing a ceiling. The original design by DMJM Harris had specified perforated metal panels painted white and installed throughout the terminal’s three levels of expansive ticketing, baggage claim and boarding gate areas. However, the job of manufacturing and fitting the panels proved to be much more difficult than anticipated.

Two failed attempts at producing properly fitting panels from two different manufacturers had left frustrated project managers scrambling for a solution. Accurate was called in to see if they could achieve the impossible by fabricating 170,000 square feet of perfectly-fitting perforated panels in time for the grand opening just 90 days away.

Nearly forty years after being built, the terminal originally known as the American Airlines Terminal at New York’s JFK International Airport needed to be replaced. A top priority for American, Terminal 8, renowned for its colorful 317-by-23-foot stained-glass façade created by the American artist Robert Sowers, was starting to show its age under the use of 16,000 passengers a day. So in 1999, American Airlines broke ground on the new World Gateway Terminal. This seven-year, $1.3 billion project would be JFK’s largest terminal, the airline’s largest non-aircraft asset and American’s gateway for European travel.

Addressing one of the major complaints about the older terminal, the World Gateway Terminal features an abundance of light from both large windows and interior light installations. The DMJM design further increases interior illumination by using glossy white ceiling panels to reflect the natural and artificial light within the terminal. The aluminum panels are found throughout the space, including the angular 250-foot tunnel to Concourse C, baggage claim and gating areas. The small .125"-on-.250" staggered perforations along the surface of the panels aid in HVAC flow and noise reduction while still allowing the panels to serve their primary job of reflecting light.

The perforated design also flowed into other terminal elements, such as concourse store signage. Because of the panels’ functional and esthetic roles, proper fit was critical, as any irregularity would significantly impact the look and operation of the terminal. A ceiling tile manufacturer fabricated the first set of panels.

Unfortunately, they were not rigid enough and bowed out. This distortion in the panel’s surface caused shadowing and ruined the seamless look of the ceiling. The problem came to the attention of Don Kelley at Infra-Structures during a terminal planning meeting, as Infra-Structures was working on the terminal’s closed-circuit TV system and wall panels. When he heard of the ceiling panel issue, he offered to help find a solution. Using their broad fabrication capabilities, Infra-Structures built more than two dozen panels to determine the cause of the problem. Although the panels had the proper fit, their large size caused them to lose their shape. Infra-Structures discovered that the ends of the panels needed to be formed twice, instead of the single bend that was used on the pre-fabricated panels, in order for them to stay rigid and retain the proper shape once installed. However, his discovery posed a problem: only a few perforators in the country were able to fabricate the perforated panels with multiple formed edges. Infra-Structures found a perforator that had experience with aviation facilities and assigned them the project.

They began submitting samples, which looked satisfactory, and a production run was approved. In five months, the panels were completed and installed. While rigid enough to retain their shape, there was a problem with their finish. Once installed, the panels produced a patchwork/shadowing effect due to the uneven application of paint. Leaned against a wall, the panels looked perfect. Once installed, however, the lack of uniformity of the panels ruined the clean look of the terminal’s design and required the second round of perforated panels to be replaced.

Infra-Structures then contacted Accurate Perforating. Mike Zarnott and the Accurate team responded at once, heading to NY from their Chicago headquarters. Once the job was evaluated, Mike confirmed that Accurate could come through with the 2'-by-5' and 2'-by-3' perforated panels within budget and on time. Because of the time lost installing the two previous sets, the new panels would have to be perfect on the first try. Too much precious time had been wasted, placing Accurate in a all-or-nothing situation. American Airline’s World Gateway was set to open its doors in three months and a grand opening would not be possible with the terminal missing 90 percent of its ceiling. The time shortage and budget strains would limit production and reduce the number of spare panels to a bare minimum.

During his initial survey of the project, Mike and his team noticed that a number of the panels from the previous installation had arrived damaged. Because of the tight production volume, he knew that they must successfully minimize any damage to the delicate panels during packaging and shipping. Additionally, to aid in quelling the noise generated by the high-traffic terminal, each panel would be lined with Soundtex™ acoustical backing. Of course, the exterior needed the seamless white finish that had eluded the previous attempt. Infra-Structures had yet to determine why the second run of panels were distorting the light, and the acoustical backing would be something entirely new for Accurate. Fortunately for the project, Accurate’s longstanding experience with finishes allowed them to resolve the problem of uneven paint application.

Another of Accurate’s strengths is developing custom-made solutions for new applications, such as the panel’s acoustical backing and shipping packaging. For quality assurance, Accurate produced a large lot of samples. The samples were approved and the job was set for production. However, while Infra-Structures was pleased with the samples, the question still remained if the same quality would be represented in the production run. As the panels were being fabricated, Mike worked with a corrugated box manufacturer to design a custom box that would hold the panels and guard against damage caused during shipping. After two prototypes, they had a container that held the maximum amount of panels, safely and securely. This not only led to the safe shipment of the panels, but expedited the shipping process by fitting the most amount of panels within a tractor-trailer container.

The result of Accurate’s work was 170,000 square-feet of perfectly fitting panels with the mirror-smooth finish that reflected the terminal’s ambient light with a warm, even glow and a seamlessly applied Soundtex™ backing. Once again, Accurate proved that it can handle the most detailed jobs, from beginning to end.

“Accurate was probably the only [metal perforator] that could have done the job,” stated Don Kelley. The effort was worth it. Throughout the expansive lobby and concourses, the panels offer a soothing but dynamic canvas that is fitting for the airline’s flagship terminal. On July 27th, 2005, soon after the Accurate panels were installed, Mayor Michael Bloomberg and American Airlines Chairman and CEO Gerard J. Arpey opened the World Gateway Terminal underneath thousands of seamlessly integrated perforated panels. Accurate proved once again that when time is essential and fit and finish are crucial, Accurate is the one to call.