How Perforated Metals Are Used in Acoustics

There are two principal acoustical applications for perforated metals:

1. As a Facing for Something Else

In this application, the perforated metal is used as a protective or decorative covering for some special acoustical material; that material may be designed either to absorb sound or to reflect or scatter sound in a special way. So, the purpose of the perforated metal in such applications is to be so "transparent" that the sound waves pass right through it, without being diminished or reflected, to encounter the acoustical treatment that lies behind. 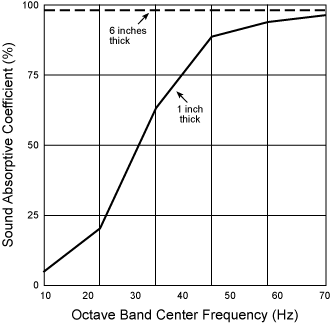 2. As a Tuned Resonant Absorber

In many noise control applications, the objective is to remove or reduce sounds that occur only in a narrow range of frequencies. For such situations, it is possible to design a sound absorption system that is "tuned" to those targeted frequencies in which perforated metal plays a critically active role. This kind of system is called a Tuned Resonant Absorber.

By employing such a system, the designer can reduce the thickness of the absorbing layer and save space and cost. This is illustrated in the chart on this page. It clearly shows that if the target frequency range centers on 2,000 Hz, an absorbing layer of just 1" would remove nearly all of that sound.

In a resonant sound absorber (refer to diagram), the air motion in and out of the holes in the perforated metal sheet oscillates in response to an incident sound wave. The preferred frequency of oscillation is determined by the mass of the air in the perforations and the springiness of the trapped air layer. At that frequency, the air moves violently in and out of the holes as well as back and forth in the sound absorptive layer where the acoustic energy is converted by friction into heat and is thereby removed from the acoustical scene. It is the interaction between the thickness of the perforated sheet and the size and number of the holes in it with the depth of the trapped air layer that determines the target frequency and thereby the thickness of the absorbing layer required to remove the sound.