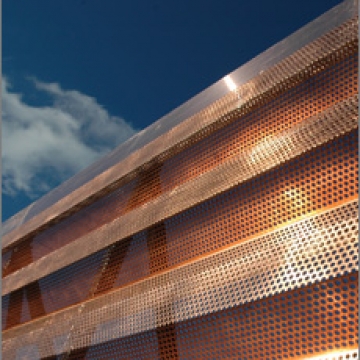 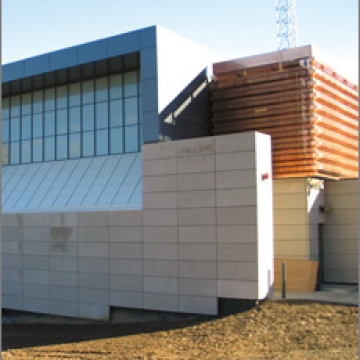 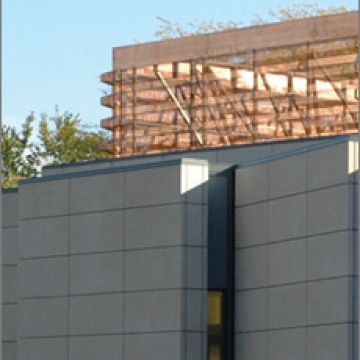 Grace Under Pressure – and Under Budget

When architects designed the $9.3 million Illinois State Emergency Operations Center with 18,000 square feet of perforated copper, wrapped around the exterior, they needed a perforator that could help them make their design a reality. With extensive expertise in turning architects’ designs into reality, Accurate Perforating was selected as the supplier of choice. To complete this project, Accurate would have to deliver on its core practices of effective client communication, customized manufacturing capabilities and precise craftsmanship. Failure to complete the project on time and within budget could result in the forfeiture of $9.3 million of federal funding and jeopardize the security of the Operations Center.

As a result of the tragic terrorist attacks of September 11th, the US government formed the Department of Homeland Security and established a $50 million grant to fund the design and construction of state-centralized emergency operation centers. This would allow emergency operations handling the intelligence, assessment and response for terrorist and natural disasters to exist under one roof.

In March of 2004, Illinois Governor Rod Blagojevich announced that the new State Emergency Operations Center (SEOC) would be located in Springfield, Illinois and would house the State Terrorism Intelligence Center, the Illinois Terrorism Task Force, the Radiological Emergency Assessment Center and response personnel from the Illinois Emergency Management Agency. To fund the project, Illinois had been allocated $9.3 million from the federal grant, the second highest allocation in the country. However, the grant required that the project stay within the budget and be completed within 18 months.

The state of Illinois’ Capital Development Board would oversee the design, engineering and construction of the complex. Award-winning, Chicago-based DeStefano + Partners would be the architects. The DeStefano + Partners’ design specified the use of the 18,000 square feet of perforated copper panels as exterior cladding to the SEOC. RPS Engineering, a subcontractor, would be in charge of the installation of the panels. As well as being esthetically pleasing, the screen would serve three practical functions: help diminish heat and glare from the sun without dramatically reducing light; provide security by reducing the ability to see into the facility; and serve as protection against nature’s rage in the heart of Tornado Alley.

Thanks to a progressive pricing structure and attentive, detailed service during the proposal process, Accurate Perforating was assigned the project and given the specifications. The paneling was to be formed using a special 6-inch-deep sheet made from 32-ounce copper, double the typical weight. The screen would be perforated with ½-inch round holes on ¾-inch staggered centers. The screen’s overlapping panels would be bolted to a tubular frame affixed to the building’s exterior. The panels would be attached to the frame in overlapping sections.

However, the design had to be customized to ensure that when the panels were installed, the holes would line up where the panels overlapped, and also with the securing points on the underlying frame. If the holes did not line up, not only would the continuous look of the façade be lost, they could not be bolted to the frame. Time and budget constraints mandated that there could only be one production run. If the panels didn’t overlap properly, the project could be in jeopardy with over $9 million in federal funds lost. Accurate worked continuously with RPS Engineering, communicating through every step of the custom design development, to ensure the panels would meet these exacting standards. This level of commitment kept the project on schedule and ensured that both companies would be pleased with final the outcome.

Accurate’s attention to detail and advanced CAD capabilities identified the fit of each panel against each other, and to its respective place on the frame. Once the panel design and specifications were reviewed and approved, Accurate created the custom tooling required to punch the panels. The pre-production design was authorized and the production run began. Shortly thereafter, the fabricated panels were shipped to the Springfield site and attached to the structure – they fit perfectly.

On Wednesday, October 26, 2005, Governor Blagojevich cut the blue ribbon on the 50,000-square-foot Illinois State Emergency Operations Center, complete with 18,000 square feet of copper perforated panels. The Center was completed on time and on budget. Accurate Perforating’s detailed engineering and fabrication delivered the perfectly fitted screens two months ahead of schedule and $200,000 under budget.