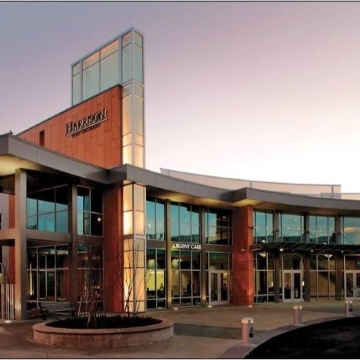 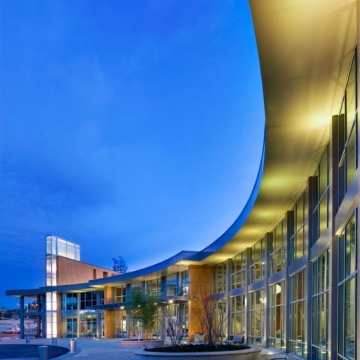 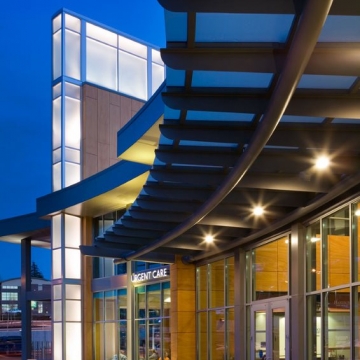 In less than a year, South Kitsap Medical Campus in Port Orchard, Washington, has undergone a dramatic transformation. A visually striking 36,000-square-foot new two-story building with a curved, light-filled atrium now stands next to the medical outpatient facility's original 33,000-square-foot rectangular building. The addition and makeover has been accomplished in a way that makes the two buildings appear to be one contiguous structure.

The crowning touch to South Kitsap Medical's new look is several sections of perforated metal screen made by Accurate Perforating Company of Chicago, IL. The metal screen is a unifying architectural element, helping achieve the architect's vision of making the two buildings appear to be one. The perforated screen visually joins the two structures, running along the roof of the new building, crossing to the original, where it angles downward and drops to the ground next to the rear entry of the older structure. The screen also hides the rooftop mechanical equipment atop the two buildings.

"We chose this particular screen because it was visually striking as well as structurally capable of withstanding wind loads from storms." said Dan Ryan, President and CEO of Tim Ryan Construction of Poulsbo, WA., the general contractor for the project. "The perforations cut down on the impact of the wind and the weight of the screen gives it the structural strength we need up on that roof."

Ryan also speaks as the owner of the project. He also heads up Tim Ryan Properties, a sister company of Tim Ryan Construction. The Ryan companies started the project as general contractors for the medical facility's original owner, Harrison Medical of Bremerton, WA., which operates two area hospitals and is the major provider of healthcare in Kitsap County, located across Puget Sound from Seattle. Before the deal was done and ground broken, Ryan bought the seven-acre property from Harrison in a purchase/leaseback deal. Harrison used the eight million dollars of newly free capital to extend its South Kitsap Urgent Care hours to 24/7 and build new outpatient facilities in underserved areas of Kitsap and Mason County.

"Our first major decision as project owner was to stay with Harrison's architectural vision for the project," Ryan states, referring to plans by RFM Architects of Bremerton, WA. "It probably would have been easier and less expensive to build a long rectangular building similar to the original. We chose to stay with RFM's master plan and drawings because we realized that they would create a great space for patients and visitors, as well as give us a building for our portfolio that would be very attractive to doctors looking for quality office and clinic space."

The changes made to the medical facility are more than superficial. Major construction surgery was performed to structurally integrate the new addition with the original building. Accurate’s perforated metal would be a key element in that integration.

"The new screen had to be more than just a lightweight visual barrier hiding the mechanical equipment." Ryan said. "It serves an important architectural purpose, which is the visual and physical integration of the two buildings. It has to be able to stand up to anything time and the elements throw at it. That meant a heavier screen with adequate structural support points on the roof. The results are there for the whole world to see."